MAY IS RESPONSIBLE ANIMAL GUARDIAN MONTH: BE A GREAT PET PARENT

Animal Harbor held its 2nd annual 4-Person Scramble Golf Tournament Saturday, April 27th, at the beautiful Bear Trace Golf Course at Tims Ford State Park. While enjoying perfect weather, the geese, their fuzzy goslings, and the deer all cheered on the fourteen competing teams. Along with team prizes, there were individual payouts for most accurate and longest drives; closest to the pin on five par 3's; and a putting and pitching contest. First place team winners were Josh Cook, Allen Hill, Miles Smith, and Paul Haidak.  Two other winners were Doug Powell and Mike Hopkins. Their prize was an unexpected reunion at the tournament after many years apart. Both were graduates of Franklin County High School and both played in the band. Mike, C'73 was a drummer, while Doug, C'74 played the trumpet. Good things happen when people come together for a good cause. See Sherry DiGregorio's account below of another Animal Harbor success story. We would like to thank Bear Trace at Tims Ford for use of the course, Linda Winn for her organizational expertise, and extend a sincere thank you to all of the local businesses who supported the Harbor through advertising which sponsored individual holes and prizes. Our mission to re-home healthy, happy animals took another step forward because of their generosity. This event has become our second largest fundraiser, so mark your calendars now for next year's 3rd Annual event on April 25th!

How We Met Jackson

In Nov 2017, we lost our beloved border collie, Jack, after 14 years of wonderful companionship and love. Being dog people, we didn’t last long before considering adopting another! We were asked by a friend to play in the Animal Harbor charity golf tournament in the summer of 2018 and stopped by Animal Harbor on the way into town that weekend. Although neither of us had experience with smaller dog breeds, we thought a smaller dog would work well at this point in our lives. We were greeted by some wonderful people, and as we walked down the row of dogs, a cute little Chaweenie with big brown eyes drew us in. We were told his name was Jackson, which seemed like fate. We played with him and another small dog, but knew right away Jackson was the dog for us. He is precocious, full of life, tenacious, playful, and smart; but he also loves his naps and snuggle time. One of his most endearing features, his ears, are sooooo big we would have called him Radar if he had not already been named. We can not imagine being without him. We are so grateful to Animal Harbor for the love and care they showed him while he was waiting for us. It is such a wonderful organization and we will continue to support it in all the years to come!

May is Lyme Disease Awareness Month - Keep Your Pets Safe! Lyme disease is the most common vector-borne disease in the USA, and is transmitted by the bite of a tick to humans, dogs, cats, horses, cattle, and other wildlife. The bacteria can travel to multiple body organs, causing systemic illness, most commonly in the joints. The usual host of the disease is the "black-legged" or "deer" tick. While less common in cats, symptoms of disease in both dogs and cats include: Lameness, swollen joints, sensitivity to touch, stiff walk with an arched back;Difficulty breathing, lethargy, malaise;Fever and lack of appetite which may accompany inflammation of the joints;Swollen superficial lymph nodes close to the site of the tick bite; Heart abnormalities and nervous system problems are reported, but rare. If you suspect your pet is infected, see your vet and ask for a blood test. The importance of swift treatment is necessary for a successful recovery. A four-week course of antibiotics is administered as soon as the disease is confirmed. You can take the following precautions to help prevent Lyme disease: Frequently check for ticks on your pet and know how to identify the black-legged tick. Go to Tickepedia at this link for pictures.Keep the lawn mowed short, and avoid areas with high grass, marshes, and woods.Use a topical tick repellent or vet prescribed tick collar on your pet and ask about the Lyme Disease vaccine.

Be Kind to Animals Week- May 5-11 (And All Year Long!) May 5th marks Be Kind to Animals Week. In light of this event, we would like to spotlight animal abuse in our own towns. Unfortunately, we have had several instances of abuse come through our doors this month. Be aware that animal abuse is not limited to big cities and other locales.  ﻿IF YOU SEE SIGNS OF ABUSE, REPORT IT TO ANIMAL CONTROL!

Cowan, a Shitzu/Pekingese mix, was found tied out and entangled in brush, and partly submerged IN the creek, unable to get out, dumped there by her previous owners. Cowan had very obvious health problems such as skin allergies and heartworms. If you cannot afford your pet’s vet care, find someone who can help suchas a local vet or animal shelter.  Please do not abandon your animal!  Rehome yourpet responsibly! And remember, petsadopted from Animal Harbor will always be welcomed back to find a new home. 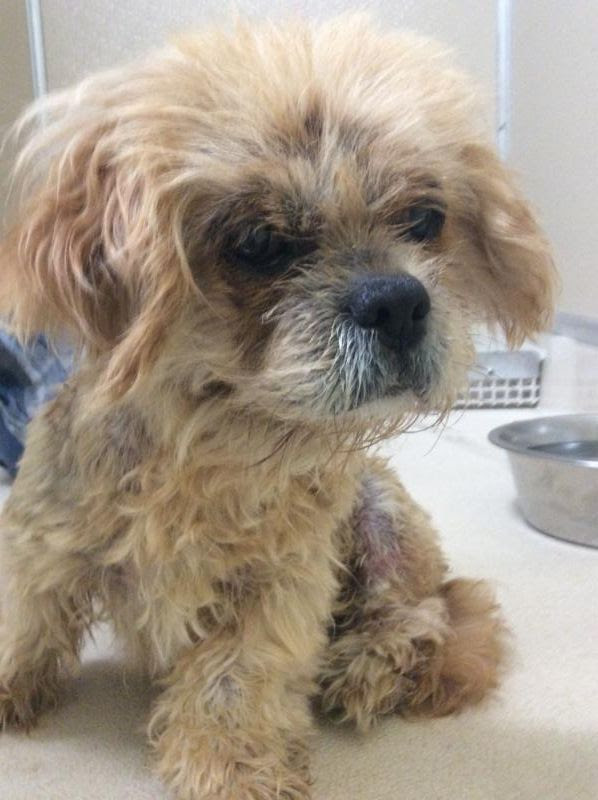 Dominique, a Pit Bull mix, came to us with a serious ingrown collar neck injury because of being chained up, unsupervised. Please do not leave your dogs chained without viable food, shelter, and supervision, and make sure that as your dog (or cat) grows, the collars are checked to see if they have become too small. This is not a life for a beloved pet to have to live. If you can&#x2